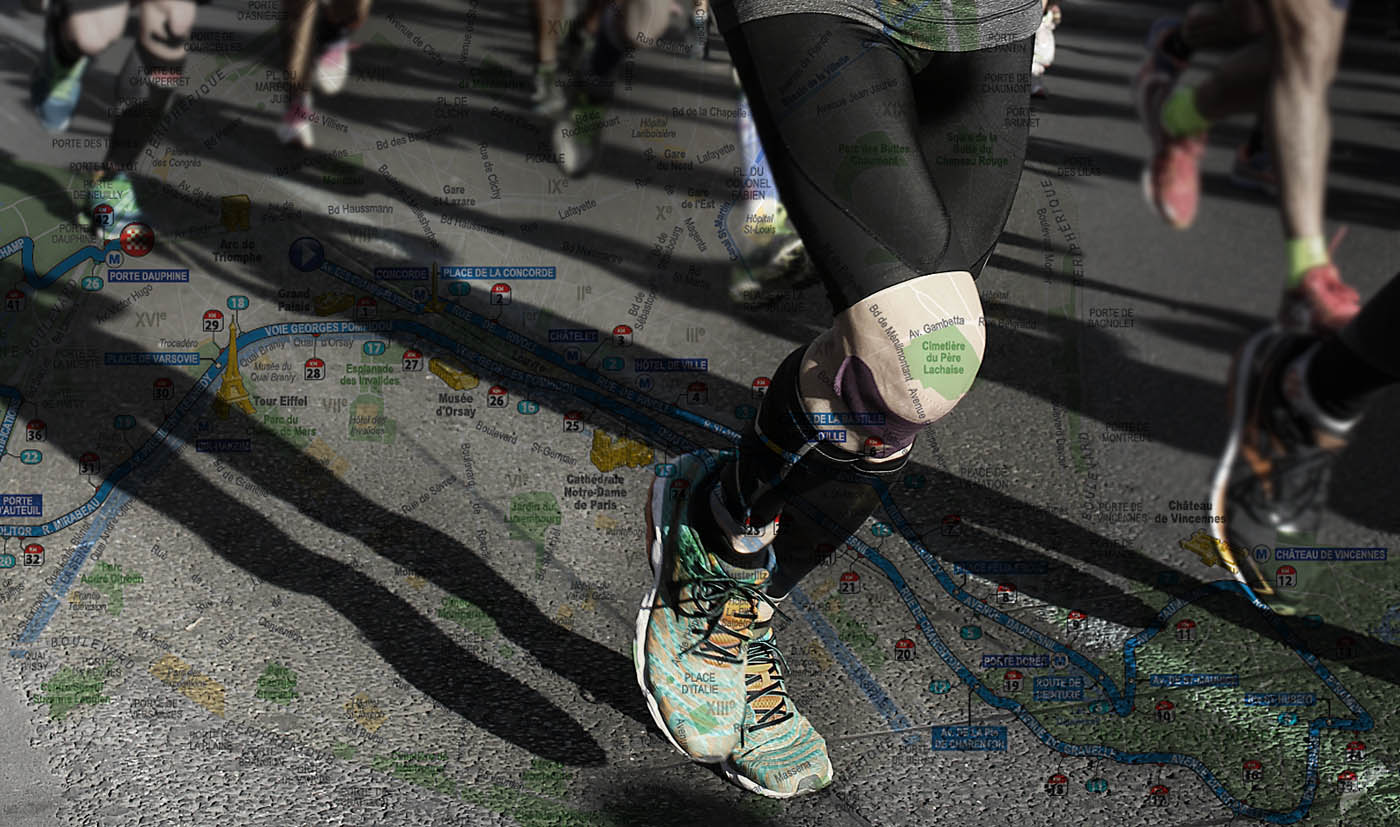 “I feel like we are in the movie The Warriors and this is the running gang,” my friend Chris observed as we patiently waited on the Metro platform with my fellow runners en route to the Marathon de Paris.

“Right,” I said, “and our weapon is talking about running.” 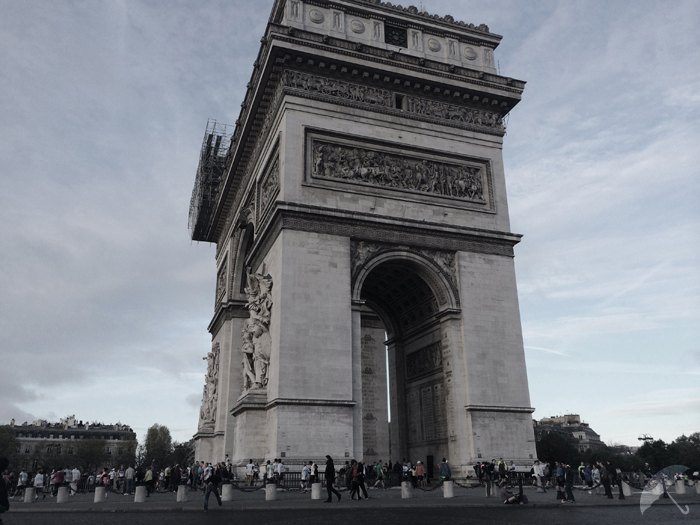 By the time we reached L’Arc de Triomphe the train was compression-shorts-packed with the pervasive smell of camphor, GU gel and pre-race B.O. These were my peoples; a gang of salt and peppered dudes in their 40’s from around the world embarking on a 26.2 mile ride through the streets of Paris. A curious observation: the man-to-woman ratio of this race was probably 8:1. A real saucisse-fest if you will. 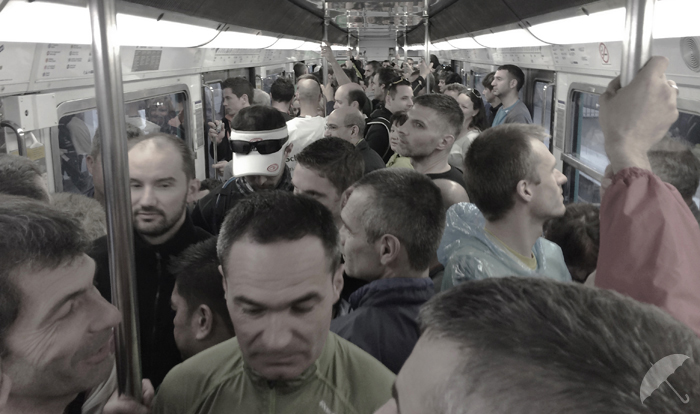 I gracefully draped myself in the plastic Schneider-Electric Jogging gown that I acquired at the running expo and sashayed to my time-specific corral; although looking back I’m pretty sure the poncho wasn’t meant to be cinched. What can I say? I like my plastic fetish cocktail dresses fitted. 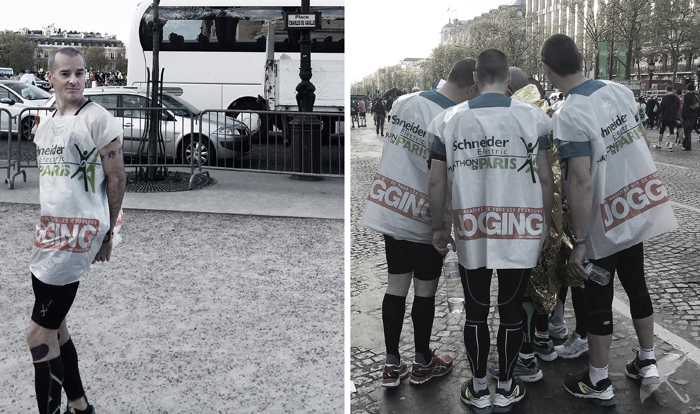 Ya see, prior to sustaining multiple successive running injuries (all of them) I ran a 1:40 half marathon. My initial marathon goal was to hit a Boston qualifying time… certainly not out of the question; so, way back in October I registered to be in the 3hr30min group–the “blue wave”. With little to no training in the months leading up to the Marathon de Paris a more realistic group might have been “the crossing the finish line wave”. Unfortunately, changing my color wave group was not possible nor was entering a gate of a different color other than the one I signed up for. 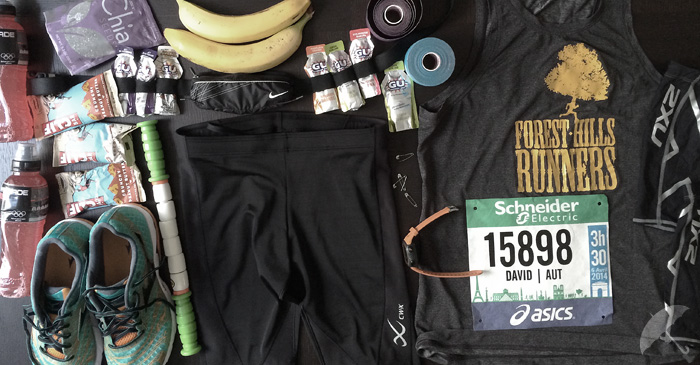 As far as representing the country of Austria… It was odd because when I registered online for the Marathon de Paris, the form-field for nationality read, “select your heritage.” I scanned the drop-down menu twenty times. No USA. No America. I even searched for aux États-Unis. So then I thought, “okay, maybe they just mean heritage, like… I’m half Austrian, so… Austria?” My bib read “15898” followed by “AUT”. Whatever. My bib also read 3hr30min, so while neither statements were necessarily correct they were at least pretty fucking close.

Unlike previous races, I wasn’t all that anxious the night before the marathon. Maybe it was the wine, (yes kind of a faux pas on race-day eve, but considering I wasn’t too concerned with following a strict regimen at this point… it worked for me), or maybe it was just being in Paris. Going into the endeavor with low-expectations worked in my favor–not that I didn’t do my homework. 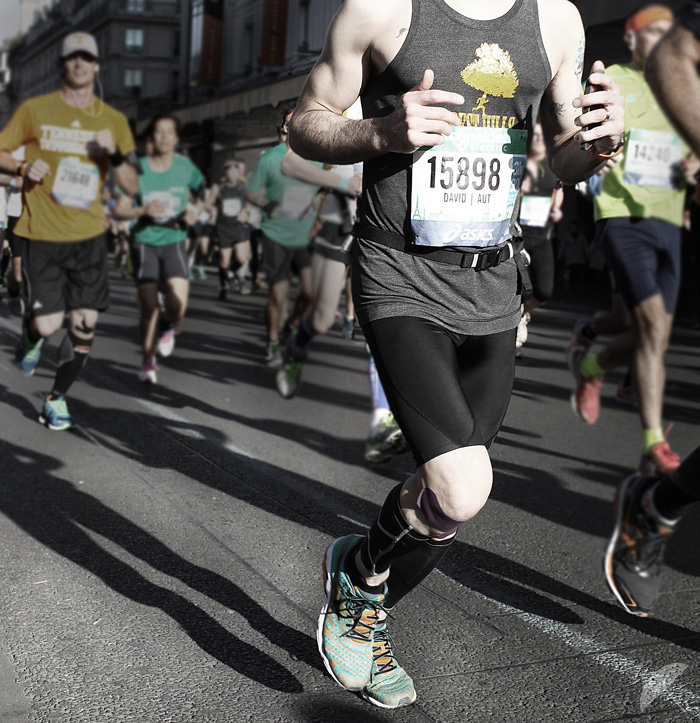 I definitely went on an existential journey inquiring every person I knew that had completed a marathon, “what was it like for you?” and the answer was almost always invariably the same… “it sucked, and it was awful.”

But asking someone about their first marathon experience is an exercise in futility… there really is no narrative that can prepare oneself for running 26 miles other than a first-hand account.

I decided to make the most of my race and enjoy a scenic tour through Paris at a nice easy pace. And, of course, to stop and smell the proverbial roses.

As the mostly male crowd started advancing over the start line I was thinking, “Holy shit… Am I running a marathon?”

For an art student that hated sports most of his life–this business of marathoning truly was (and is) a random distortion of my personal reality.

I give the Parisian populace a basket full of kisses for their very enthusiastic spectatorship. Because my name adorned my bib, “David” (the Austrian running a three and a half hour marathon), I was encouraged throughout the entire course. For 26.2 miles I was greeted with, “Allez David! Bravo David!” I gave enough high-fives it’s kind of amazing I haven’t yet succumbed to some Euro-strain bout of influenza.*

After emerging from the disco tunnel, I was absolutely astounded at the amount of crowds cheering that I actually teared up and wept just a tiny bit.

“Disco tunnel?,” you ask? Allow me to discuss the disco tunnel.

I don’t know if this is the same tunnel where Princess Di met her ill-fated doom, but this part of the course descended straight into Studio 54. The French just know how to do certain things. I mean, it would’ve been impossible to think about how many miles were left or calf muscles cramping up or how long until the next water station while simultaneously listening to Diana Ross belt out “I’m Coming Out” with a dazzling disco light display in a pitch-black tunnel. Waiting on the other side of the in-the-know clandestine discotheque was a spectacular and rewarding view of the city, the Eiffel Tower and a stroll down the River Seinne. (One of my favorite parts of the course.)

It is my understanding that many marathons have bands and music throughout their respective course, but I was blown away by some of the performances. Everything from Japanese Taiko Drums to Rock/Pop bands to amateur orchestras. Somewhere in the middle of the run I could hear the starting chords of Free’s classic rock anthem “It’s Alright Now“. Because my objective was to finish the race, mildly unconcerned with a proud net time, I decided to sit in with the band… they handed me the mic and I sang a little of the chorus. They loved it, but I loved it more.

The course featured occasional on-site massage. I most certainly took advantage of this… who wouldn’t want to have their thighs aggressively rubbed down mid-race by a vey cute Parisian? (This was my longest split. Bad-da-bing!)

The last six miles meandered through the Bois de Boulogne. I kept thinking, “Where the fuck am I?” Surely, this forest would end soon, right? I am in Paris at mile 24 and it would seem, to me, that I should start seeing Paris. And there is no Paris. Just woods. Endless woods. And two wine stops–miles 22 and 24 respectively. A wine stop! I didn’t partake, but for the people struggling to manage the last six miles while walking it out, I can imagine it was a welcomed gesture and a pleasant way to finish out the race. (Also for the record, I’m not suggesting I didn’t struggle… I definitely strutted my fair share of the run/walk shuffle through the never-ending forest.)

Apparently at mile 18.5, one of the first magnificent views of the the Eiffel Tower, I had stopped to take some documentary video and somehow my friends did not see me nor did I see them. Out of 50,000 runners, I am shocked! Just shocked that they couldn’t pick me out. 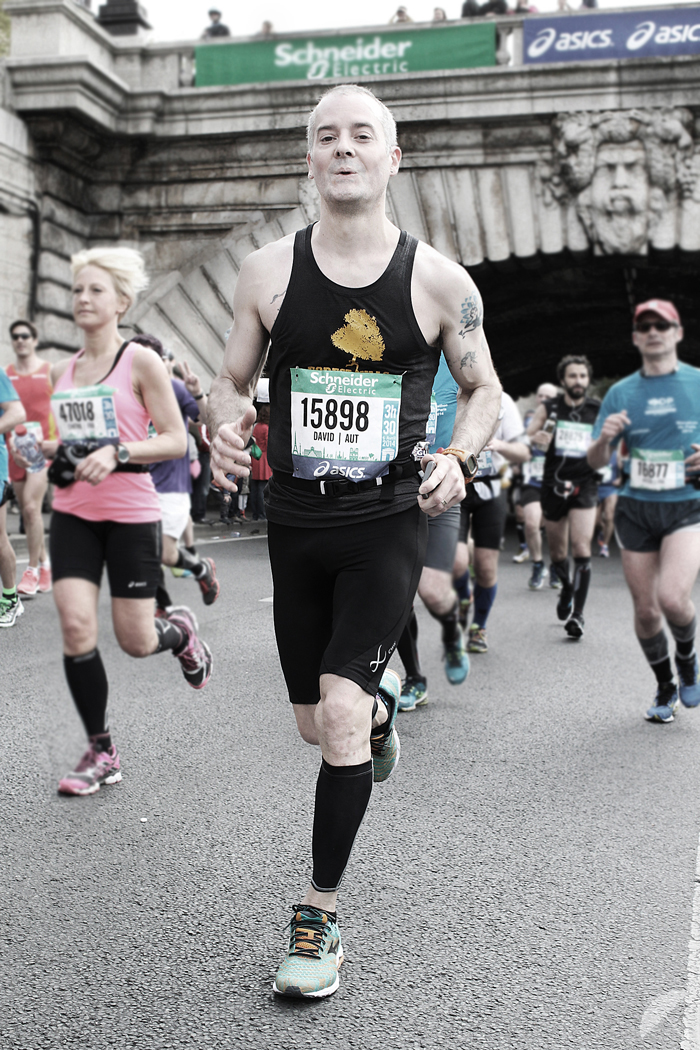 I could not be making a more French face than this

One odd thing is that I never found that pacer, that person to bond with. I was kind of sad to not experience a shared moment of camaraderie with a fellow runner while crossing the finish line. My pace was all over the place, so I can’t imagine this having been possible. I did have a gentlemen pull me out of a schlep to run out the last mile and a half, but the finish felt oddly lonely. But, sometimes that’s what running is.

The finish area at the Marathon De Paris was a little intense. A lot of people. When I registered for the race I paid extra for the VIP post-race treatment–massage, etc. I asked a race volunteer where the massage was and they pointed to a large white tent with a long line. It was… interesting. I love that that runners have no body shame. People were stripping down left and right… a lot of near naked people getting rubbed down with camphor.

The massage was ok. Two parisian 20-somethings… I think they were a little confused by my painted toe nails. They didn’t speak English so I had to emphatically point to areas of concern. 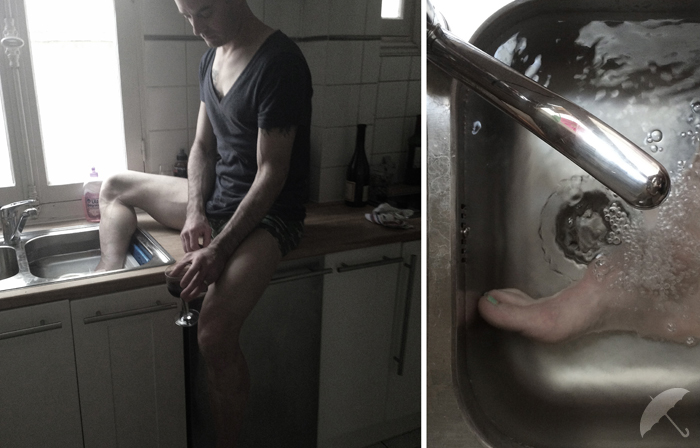 icing chez-tornado in the 6th

I didn’t realize that the massage tent that I waited in line for was a free service for all racers… had I walked just a few meters farther I would’ve been greeted by a very cushy VIP tent, the one I paid for, replete with a spread of food and drink served by an on-premise chef. Damn! Really? I went ahead and entered but by then an hour had passed and I felt bad that my friends and wife that had come to see me (but didn’t) were maybe still waiting for me somewhere. Due to the fragile nature of French cellular service I couldn’t get a hold of anyone. I really, really wanted my VIP massage, but instead I scanned the tent, wistfully sighed, grabbed a cookie and left. 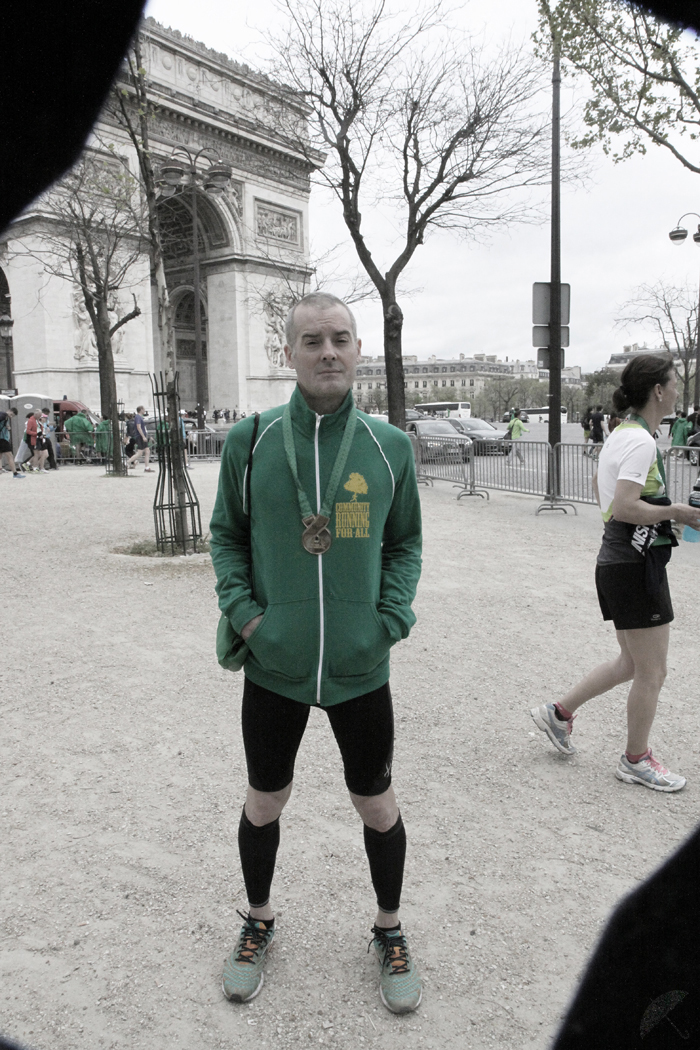 Actually the worst part of the race was just finding my wife afterwards. By the time I did, the high of finishing the race had faded. It was wee bit anticlimactic. I have one hurriedly taken post race photo of me standing in front of L’Arc de Triomphe. Something about the camera strap in the frame of the picture adequately captures the mood.

And that was my first marathon.

I finished in 4:23. There is part of me that wants to justify the time with all the fucking around I did to make it fun, and that perhaps if I hadn’t stopped to sing with the band or take pictures of the Eiffel Tower, I could’ve actually had a fairly decent time. But maybe, maybe, those were the things that allowed me to net the time I did. Let’s be honest, I’m not an elite athlete. Whether I finished with a 3:15 or a 4:23 really only matters to me. The important thing–and the thing that I mentally prepared for–is that I had a really great time. I didn’t hate it. It didn’t suck. I loved every moment–even the tough moments, i.e. endlessly running through a forest, unbeknownst to me, situated on the doorstep of Paris.

I also have the utmost respect for anyone that has the determination to run a marathon. Time doesn’t impress me so much–distance does. 26.2 miles is a really long way to run. As a co-worker said, “thats a long drive.”

I didn’t properly train for this marathon and what I mean is: I didn’t follow a training plan. What I don’t mean is: I sat on the couch for two months. I spent five days a week swimming. I think this was crucial in giving me the best possible chance at being able to run 26 miles.

I never felt “weird” or shaky. I never felt diverged of energy. I did, however, suffer from massive muscle fatigue the last six miles. It was like I downed several Somas and, while not drunk, possessed zero muscle control. “Work legs! Work!” Again, probably symptomatic of not having run anywhere near this far ever in my life. Ever.

Will I run another marathon?

*I have since come down with a bout of influenza. 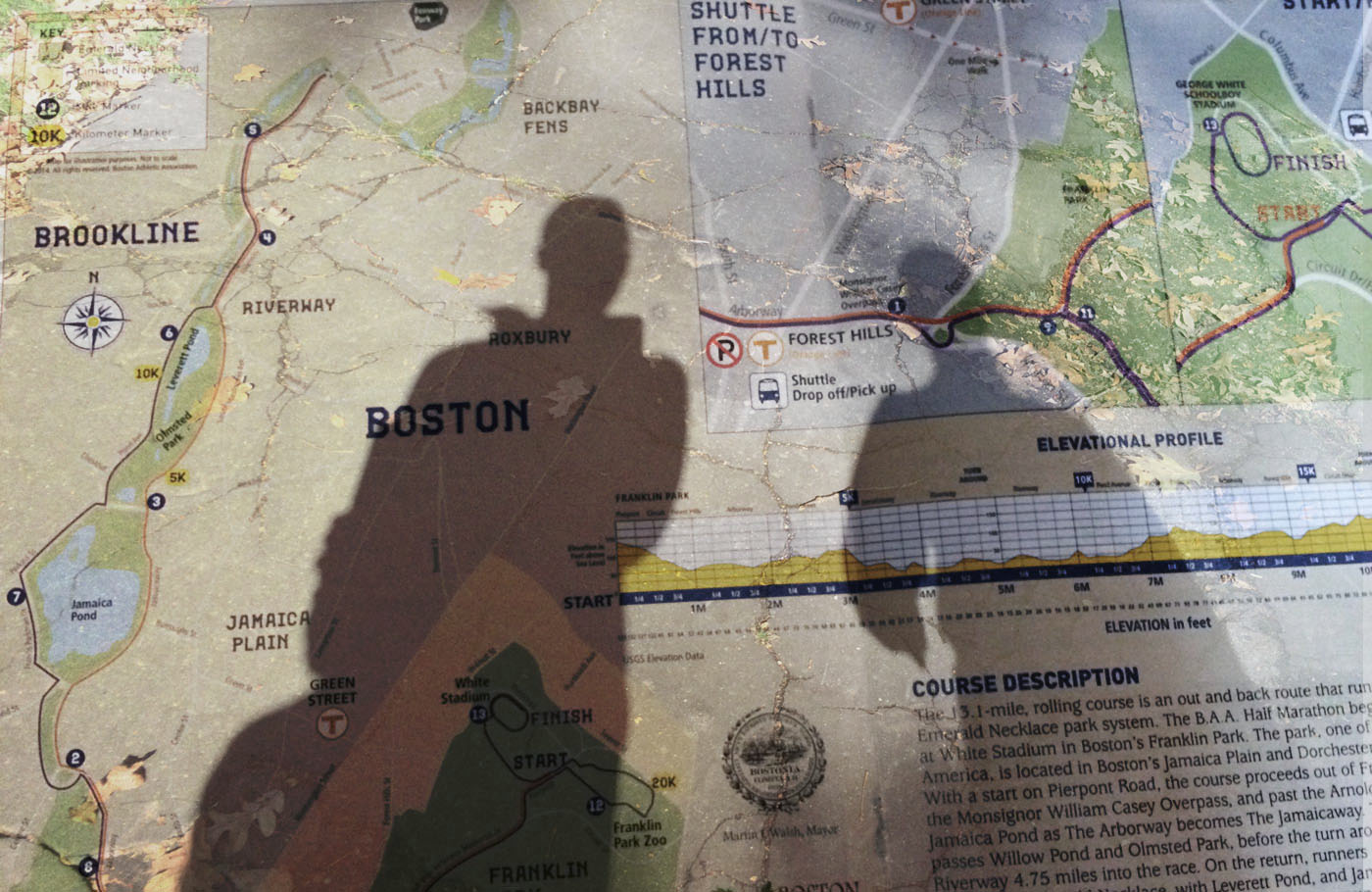 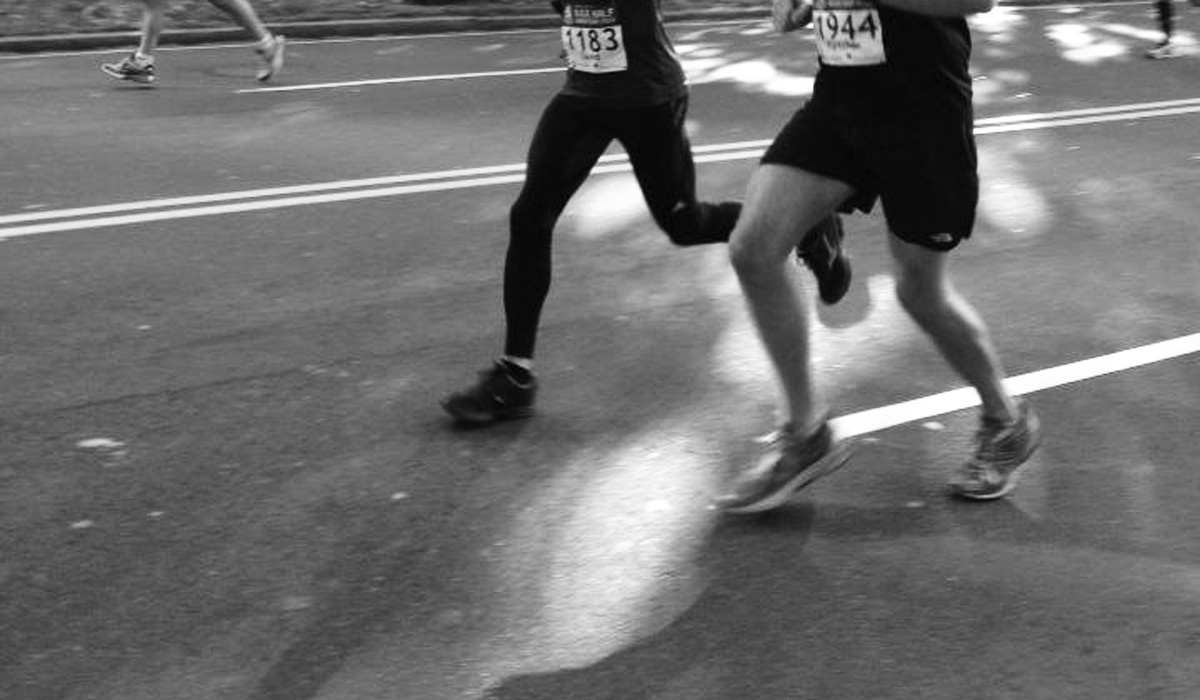