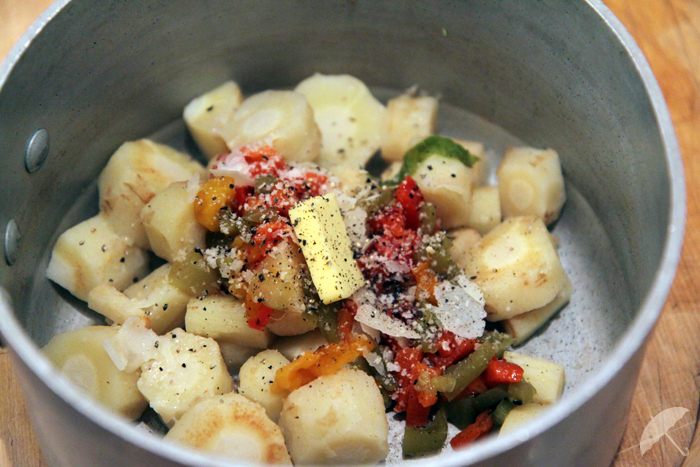 I ditched my Volvo a few months ago. The timing was fortuitous as my workplace recently moved to Downtown Boston conveniently upgrading my commute from road-rage to riding the T. (T is Boston speak for subway [for my non-Mass readers {Mass short for Massachusetts}]).

I loved my V40, but it was a contentious relationship. I’m still not quite sure what the V stood for… Vexatious? Or to be fair, perhaps Vivacious? Some say I drove it too hard. I disagree, that Volvo was a rally car trapped inside the body of a wagon. Regardless, someone new is enjoying that vexatious vivacious silver peppy little rally wagon.

Zipcar. People keep me asking how it works: There’s a one year membership fee of $50. (You can also sign up for guaranteed monthly driving which eliminates this fee.) You don’t pay for gas. You don’t pay for insurance. Every car has its own home, i.e. cars must be returned to whence they came. You pay by the hour. That’s it. Oh, if you sign up tell ’em I sent ya.

So far, so good. What I’ve realized is that I am much more conscious of any trip involving a car. Obviously I want to make the most of my time driving, so I make a list and check it twice. I’ve also discovered that I am much more tied to my community and shop almost exclusively local. In a previous blog I mentioned that I am fortunate to have most things I need within a few blocks of my home.

A few nights ago I ventured to Cityfeed to forage for dinner. It is a bit European, I suppose, this notion of shopping for the evening’s dinner as opposed to loading up two shopping carts at Stop’N’Shop for some sort of apocalyptic zombie scenario. Micro-shopping might not work for everyone or every situation, especially considering a majority of this country is orchestrated around the automobile, but I don’t think I could ever go back to remote living. Besides, most of the time when I “do a big shopping” half of the shit ends up rotting at the bottom of the vegetable crisper. That’s not to say I don’t make occasional trips to Trader Joe’s; I’ll be damned if I don’t have at least two cases of Pellegrino on hand when Boston’s newly constructed Bio-level 4 lab unleashes a wave of brain-hungry savages.

Lucky for me Cityfeed was hosting another beer tasting event. This week = Idle Hands. Normally I am not much of a Belgian Style Ale lover, but this is actually quite good. Chris, the brew master, said that this particular ale has added American hops giving it a crisp near-IPA finish. And how cool is it to be able to talk to the person that made the beer? I actually came in for food and wine but decided to pick up a bottle of Idle Hands for the Pats-Broncos game. And yes, the irony of Idle Hands for the Tebow match-up is delicious. 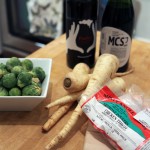 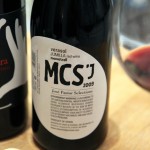 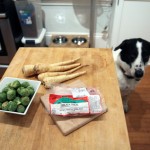 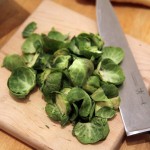 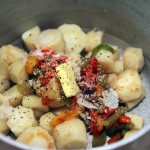 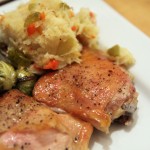 And now for dinner…

I decided on Brussels Sprouts, chicken (from Misty Knoll Farms in Vermont) and parsnips. So all of this and a bottle of ale and a bottle of wine = $36. (Still much less than eating out.)

I don’t even know what this wine is. Look at the label. LOOK AT IT. What the fuck is this? It’s Spanish and a blend. I’m no wine pro, not even close, but I do possess ridiculous olfactories. Upon first taste I picked up heavy tannins, leather, mild-acidity–not totally fabulous wine. I started cooking and about an hour later something awesome happened. The wine opened up a bit and suddenly fragrant plum notes danced around my head. I don’t eat pork, veal, lamb or beef–but this blend would probably benefit with a pairing of roasted game such as venison. I corked the bottle and the next day it had already broken down to undrinkable. (Don’t worry, I still finished it.) I might’ve named this wine fragile blossom.

I don’t do recipes, mostly because I am hard-wired to avoid all directions at any cost. (This applies to all things, i.e. driving, IKEA furniture, stretches from my physical therapist, etc.) The down-side is occasionally I will concoct something so ridiculous that it was only meant to be enjoyed once… forever and ever forgotten to the wilds of slow-firing and slowly disappearing synapses.

I’ve been trying for awhile to recreate something I call faux-confit. I almost got it this time. Basically it goes something like this: chicken in a low baking dish in the oven at 250 (or lower) for about an hour. Flash fry said chicken in a frying pan with a modicum of oil for 30 seconds. The result   should be very tender moist chicken with an oily crispy skin.  I think what I was trying to do is mitigate the artery clogging agents of fried chicken by only kind of frying it. Maybe this is stupid and I should just fry the damn thing in oil in a covered pan and get over it.

The winner of the evening had to be the parsnips. I just love parsnips. I love saying parsnips. Parsnips! It’s an interesting taste and smell that is completely unique to this root vegetable. For this dish I peeled and chopped the parsnips and boiled until tender. I drained and then added roasted peppers, a smidge of butter, coarse pepper and some shaved parmesan. Finally, mashed it all together. Absolutely delicious!

That’s all for now. I have to figure out something to pair my bottle of Idle Hands for the game tonight. Deviled eggs? 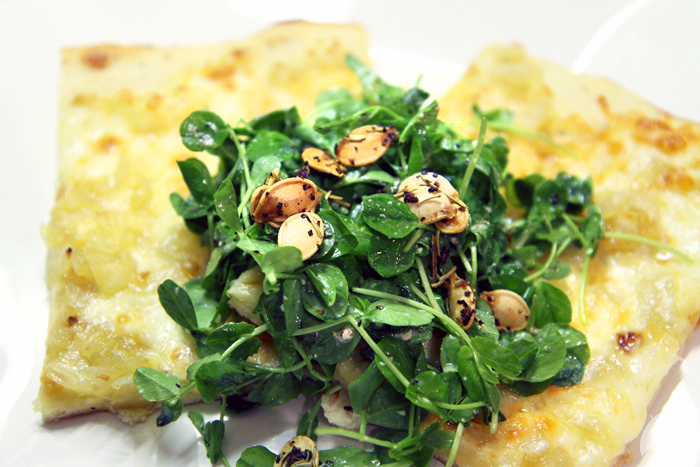 the ol’ salad on the pizza gag 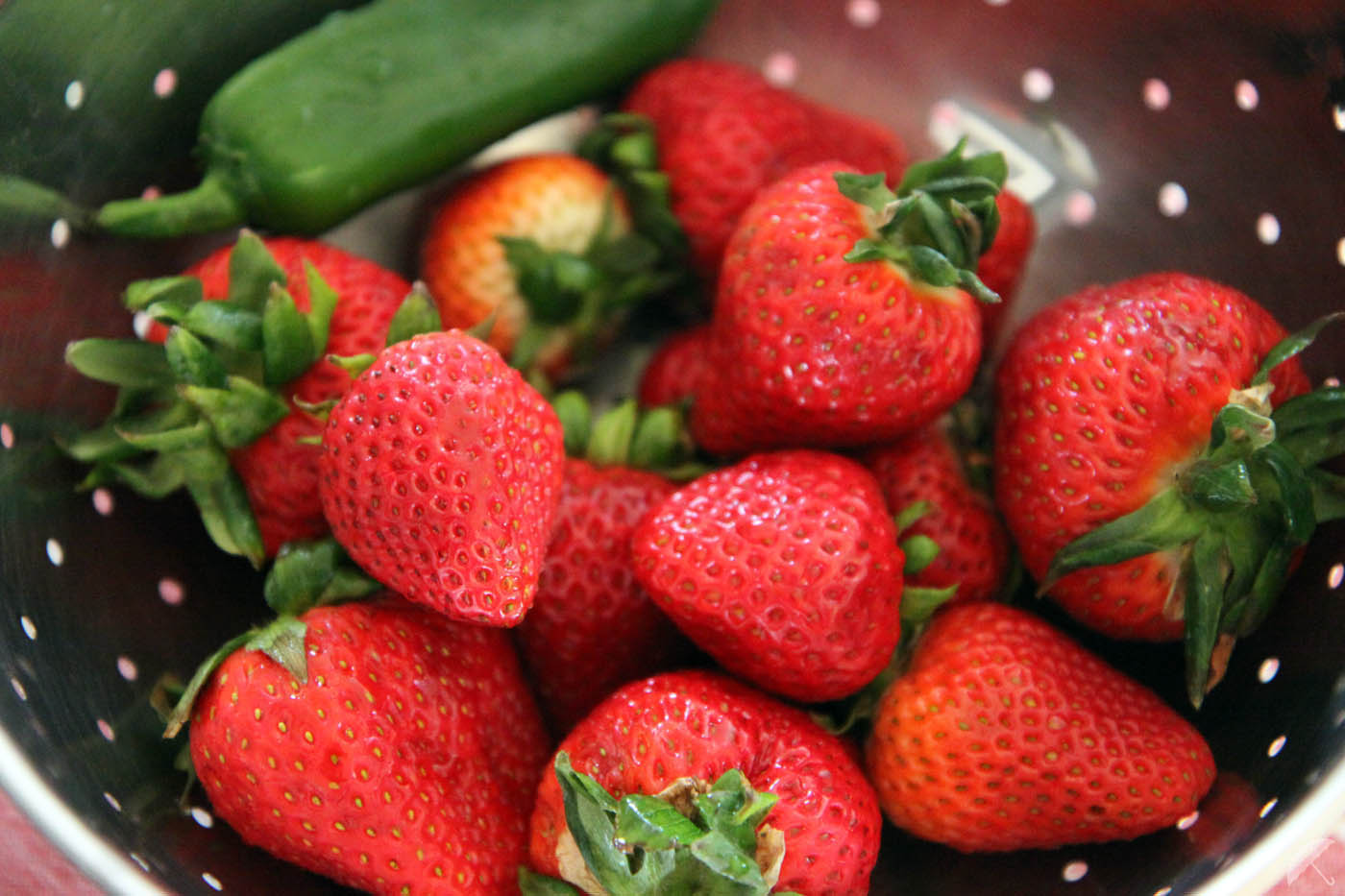 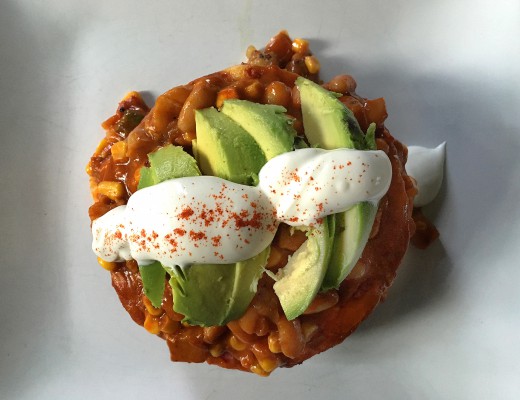